Tonight we saw Glenburn B take on Bangor at home in Division 2 of the Belfast and District Table Tennis League. The match ended with a score line of Glenburn B (10) and Bangor (0). The format for the match was a 3 Vs 3 player format. Neil Magrath reporting on the match said “Glenburn knew going into the match that they needed to win at least 8-2 to secure the league. Stepping up to this challenge were James and Rebecca (neither yet requiring self-isolation as Queens students!), together with Erin. Captain Steve, having won the consolation event at the Vets tournament the previous night decided to watch the young guns from the sidelines. Although the final score was 10-0, the Bangor players proved their usual competitive selves with quite a few sets going to deuce. After a slow start against Mark, James (winning the first set 11-9) found his range and produced a defensive masterclass to win his three matches 3-0 conceding only 35 further points. Erin fought hard against John and Mark to win both in 4 sets which saw some hard hitting putting the ball in danger! After seeing off David, Rebecca had to concentrate hard to win 3 very close sets against John. At this stage Glenburn were 7-0 up with Rebecca playing Mark, and Erin playing David, knowing one win would suffice. After winning the first set 11-9, Rebecca started to move through the gears to win 3-0 against Mark and had the privilege of getting Glenburn across the line. Shortly after, Erin signed off a successful season with yet another hard fought win against David. Steve then drew straws (or actually table tennis balls) to see who would play the doubles, with Rebecca and Erin selected. He might have questioned his strategy when they lost the first set 10-12 to Mark and David, however they came back strongly to see the match out in 4 sets. Many thanks to Bangor for the friendly and competitive match. While tonight it was James, Rebecca and Erin who took the honours with the win, with James and Rebecca maintaining their 100% record in the singles matches they played in the league, it was a real team effort with important wins by all players throughout the year, including Andy before heading to America at Christmas, with other highlights being Erin securing a draw against Queens in the first half with a win against Khoa, Lucy Craig with critical wins in the return match against Queens as part of a very consistent high performance season, Lucy Johnston coming to the fore in the second half of the season with great wins against Ormeau A and helping secure the draw against CS B with both a singles win and doubles victory partnering Captain Steve enabling Glenburn to come back from 3-5 down. As well as playing consistently well throughout the season, Captain Steve must be commended on getting the best out of the young players with his support and encouragement throughout the season. From my viewpoint, it has been a privilege to help coach the team and see the development of the players as the year went on. We would like to record our thanks again to all those involved in the organisation of the B&D league in what is often a thankless task.”.

On the Away Side Bangor sent a team consisting of:

For the doubles Bangor had Mark Willis & David Coates joining forces to take on the hosts.

With the match card now fully completed the final score of Glenburn B (10) and Bangor (0) was recorded. 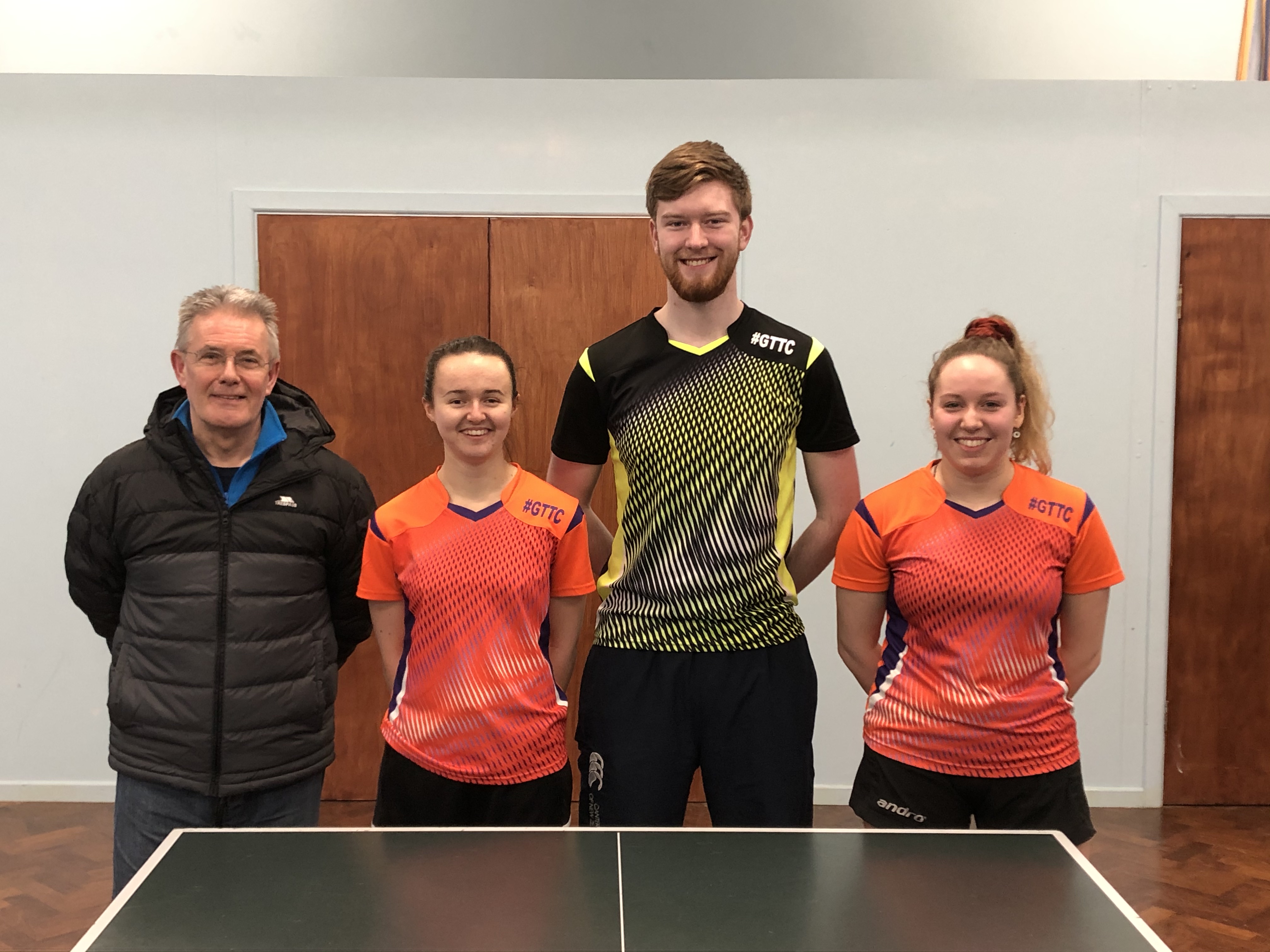 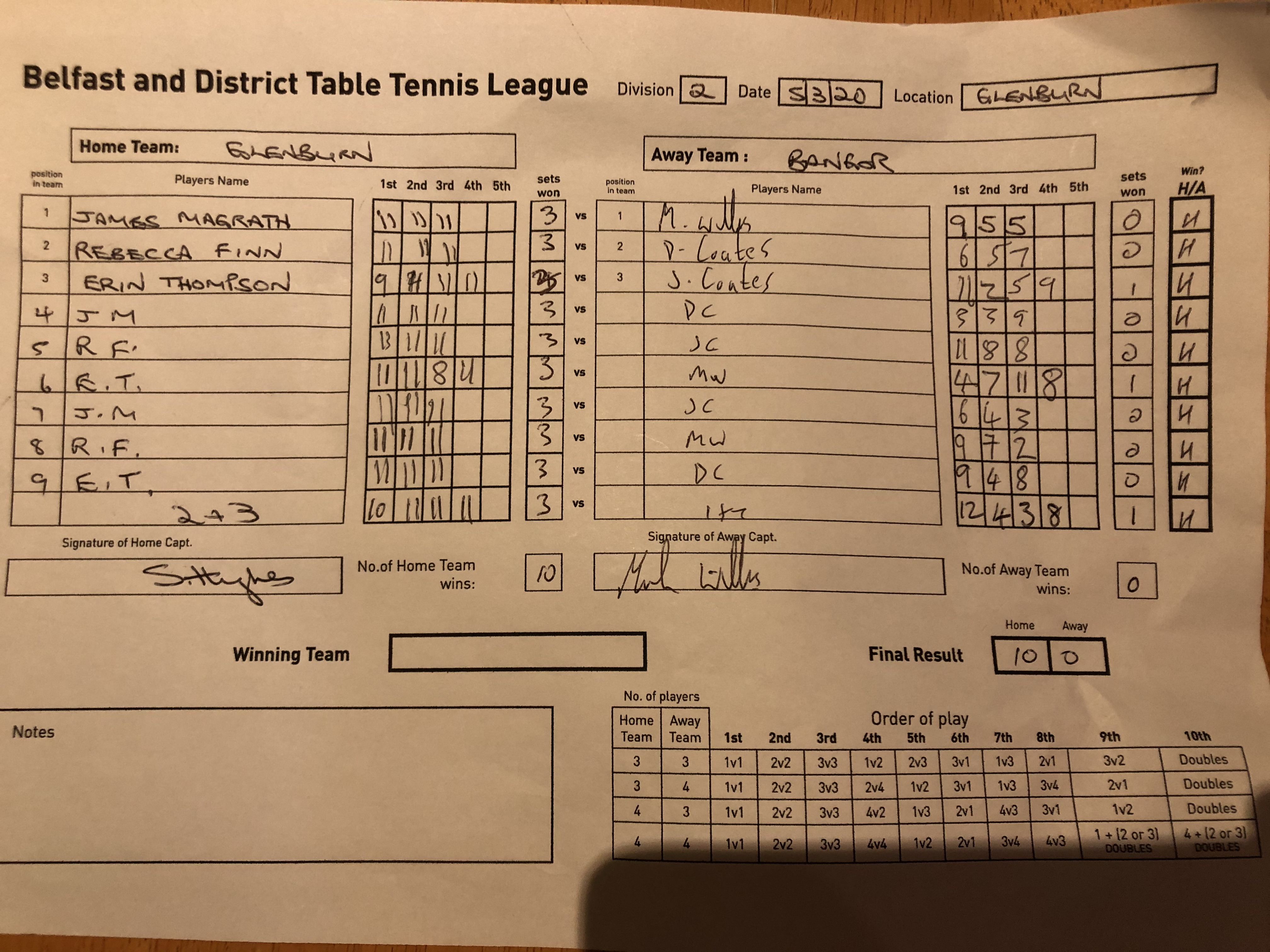