Tonight we saw Glenburn B take on Ormeau 2B at home in Division 2 of the Belfast and District Table Tennis League. The match ended with a score line of Glenburn B (10) and Ormeau 2B (0). The format for the match was a 4 Vs 4 player format.

Neil Magrath reporting on the match said “With the two Lucys not available, and Andy having left to live in America, Glenburn had to thank Rebecca for putting table tennis before studies, and James for putting in a guest appearance having not played since last season. Andrew and Matthew McCann started off very well for Ormeau B going 2-1 and 1-0 up against Rebecca and Erin who started slowly – maybe still had to work off some Christmas turkey! However, Rebecca and Erin moved up the gears to record wins in the opening matches. James, who has probably played more matches with a frying pan (in winning the Glenburn annual Christmas frying pan competition) than with a table tennis bat in the last six months, and Steve then each produced a mix of defensive and attacking play to overcome Richard and Hamish respectively. Andrew then produced another strong performance and had yet another close match losing 1-3 in very tight sets against Erin, while Rebecca found some outstanding form to overpower Matthew 3-0. James and Steve again played well to win the reverse singles against Hamish and Richard. This then led to the entertaining doubles matches where Glenburn again came out on the right side of close sets to win each 3-1. The 10-0 win by Glenburn was only achieved after some very hard fought matches and did not reflect the work put in by Ormeau B team. The match was once again played in a great friendly spirit and we wish Ormeau B the best for the rest of the season.”

For the doubles Glenburn B decided to play Rebecca Finn with amp; Erin Thompson & James Magrath with Steve Hughes

On the Away Side Ormeau 2B sent a team consisting of:

For the doubles Ormeau 2B had Andrew McCann with amp; Matthew McCann & Richard McCormack with Hamish Wright joining forces to taken on the hosts.

With the match card now fully completed the final score of Glenburn B (10) and Ormeau 2B (0) was recorded. 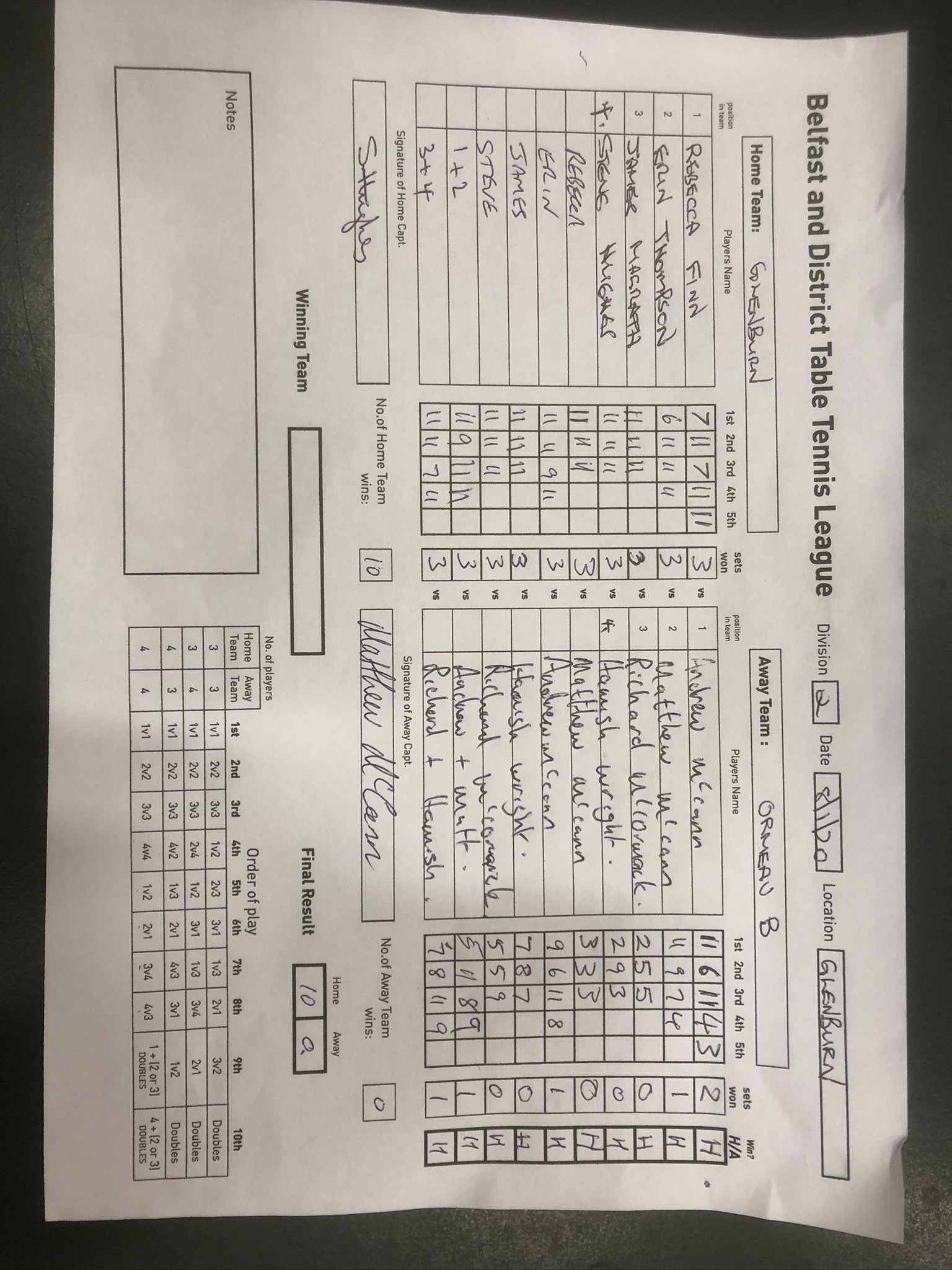