Tonight we saw Glenburn B take on Queens A at home in Division 2 of the Belfast and District Table Tennis League. The match ended with a score line of Glenburn B (5) and Queens A (5). The format for the match was a 3 Vs 4 player format.

Neil Magrath reporting on the match said “Tonight saw a classic encounter where the score of the match was always in doubt until the doubles. An experienced Glenburn team came up against Queens who have significantly strengthened their team with some new top talent. Queens got off to the perfect start winning both the opening matches with former Glenburn Div 1 player, Khoa, getting the better of Andy, and Erin losing out to a very hard hitting Zhenyu. Captain Steve then used all his experience to get Glenburn on the scoreboard with a good win over Julian. Then in the battle of the women, Erin came from 2-1 down to secure a great victory over the lightening quick Zoe leaving the score at 2-2. The next set of matches was shared with Andy claiming a win, and Khoa again proving what a top player he is in the win over Steve (although he did have more edges than Lucy J normally gets!). At 3-3 it was anybody’s match, and Andy showed true grit to come from 2-1 down to earn a hard fought 5 set victory over Julian, while Zoe proved too quick for Steve. This set up the match of the night between Erin and Khoa. Erin dug deep and fought hard for every point and, in a thrilling 4 set match which went to deuce every set, recorded a famous victory to take Glenburn into a 5-4 lead going into the doubles. Despite their best efforts Andy/Erin could not quite hit the heights and Khoa/Zhenyu took a deserved win to end the match with a fair 5-5 result. Thanks to Chris and the Queens team for playing their part in a great night’s entertainment.”

For the doubles Glenburn B decided to play Andy & Erin

On the Away Side Queens A sent a team consisting of:

For the doubles Queens A had Khoa & Zhenyu joining forces to take on the hosts.

With the match card now fully completed the final score of Glenburn B (5) and Queens A (5) was recorded. 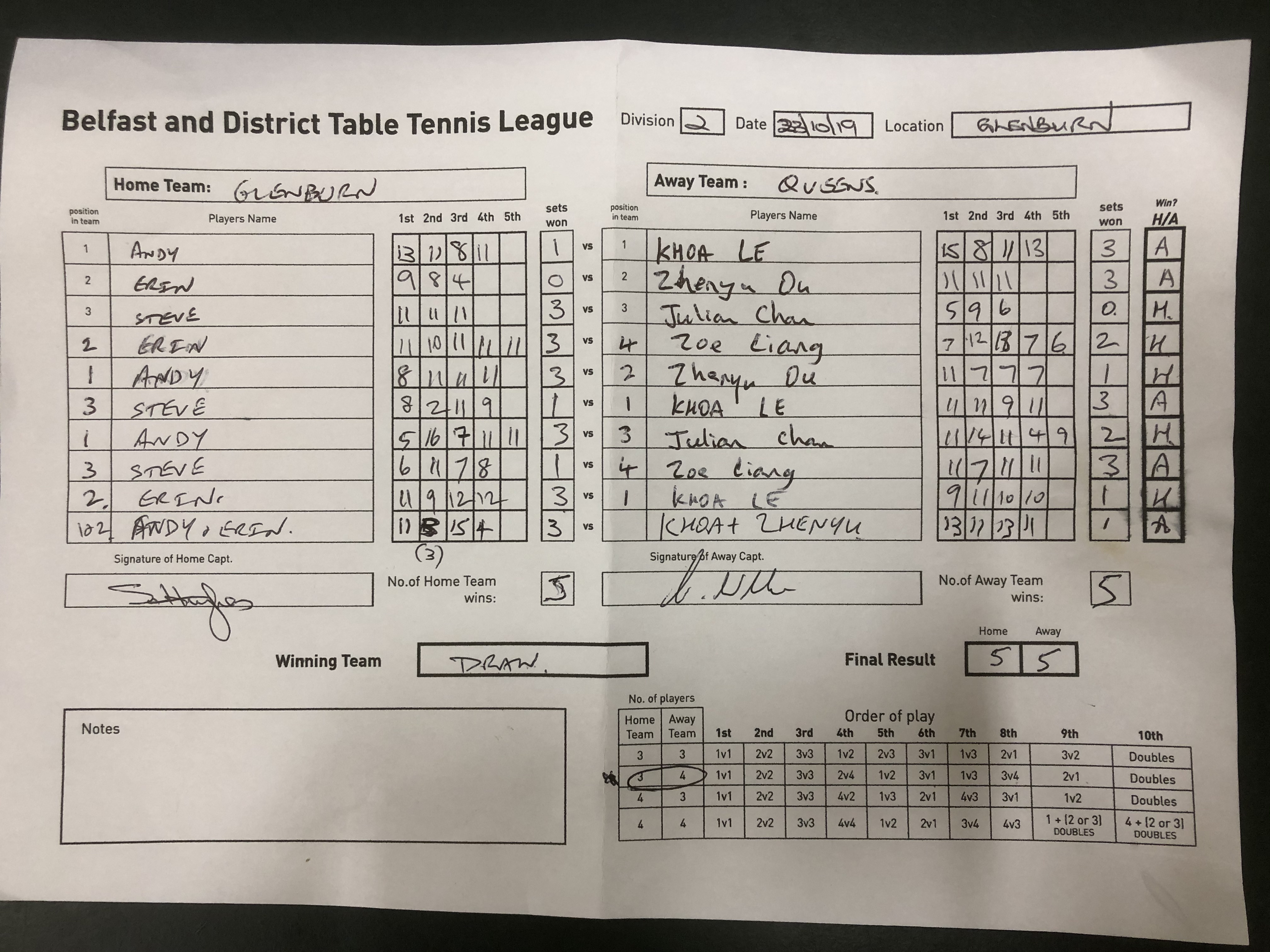