Tonight we saw Glenburn B take on Ormeau 2A at home in Division 2 of the Belfast and District Table Tennis League. The match ended with a score line of Glenburn B (8) and Ormeau 2A (2). The format for the match was a 4 Vs 3 player format.

Steve Hughes reporting on the match said “1st match up James vs Alex. Despite missing the first half of the season James got Glenburn off to a great start with a hard earned victory. Next was the first battle of the Lucys with Lucy C vs Lucy McI. Lucy McI started well, going one set up, before Lucy C settled down with a mix of attacking play and brilliant defence to win the next three sets. Steve then played Anna who was outstanding in the first two sets, her service creating many difficulties for the veteran. However, as with last week, despite being 0-2 down, Steve managed to win the next three sets to put Glenburn 3-0 up. The second of the battle of the Lucys saw Lucy J play Lucy McI. Although Lucy J won tight sets 3-0, credit to both players for some breathtaking rallies. Next up James proved too strong for Anna, and at this stage Glenburn were guaranteed at least a draw. Lucy C then played the uber attacking Alex. Although Lucy went 2-1 up, Alex went up another level to take the next two with a barrage of attacking strokes. Lucy J then went all the way against Anna winning well in the 5th to continue her recent run of good form before Alex blew Steve away. Lucy McI played very well in the last singles but James’s stubborn defence proved too much for the talented youngster. The highlight of the evening was a superb doubles match, James and Lucy C vs Alex and Anna. This was won by the Glenburn pairing however the standard of play by all four players was exceptional. It was a classic match between two top defenders and two very good attackers. Great to see Jeff supporting and encouraging his team all the way. Our thanks to Ormeau for agreeing to play the match tonight.”

On the Away Side Ormeau 2A sent a team consisting of:

For the doubles Ormeau 2A had Alex Bartusik & Anna Kelly joining forces to take on the hosts.

With the match card now fully completed the final score of Glenburn B (8) and Ormeau 2A (2) was recorded. 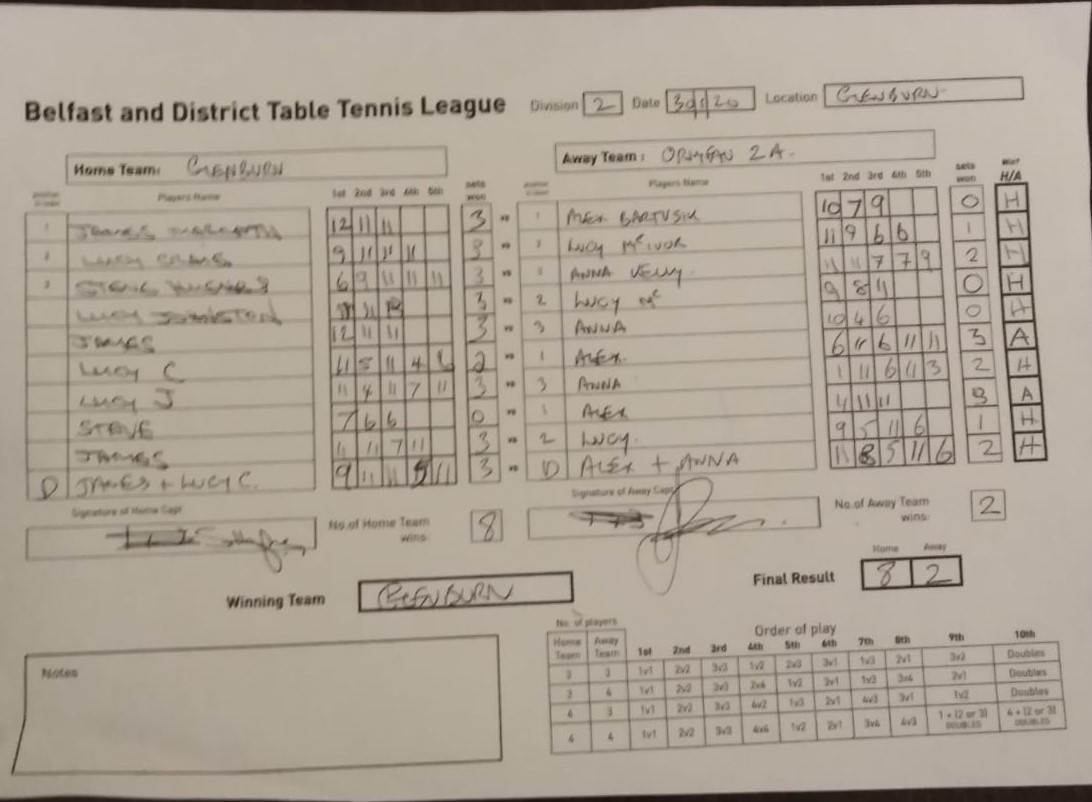