Tonight we saw Glenburn B take on Civil Service 2A at home in Division 2 of the Belfast and District Table Tennis League. The match ended with a score line of Glenburn B (9) and Civil Service 2A (1). The format for the match was a 3 Vs 3 player format. Neil Magrath reporting on the match said “While the score was 9-1 overall, there were a few matches which went to 5 sets which could have gone either way. Even the ones which didn’t had a number of deuce sets as Civil Service put up a great fight. The match really broke down to the attacking play of Rebecca and Erin getting through their six matches in about the same time as the defensive James played thee matches. The night started with Rebecca and Erin managing straight set victories against Ben and Mervyn, however these included deuce sets as Civil Service fought hard. On the other table James and Maurice were displaying a defensive masterclass – the match saw some extra long rallies and swung back and forwards until James managed to win the fifth. Rebecca then had to fight very hard for a straight sets victory over Maurice while James continued his marathon night in his next match against Mervyn with a 16-14 first set win, before winning the next couple of sets a bit easier. Erin meanwhile was made to work hard for a four set victory over the ever improving and dangerous Ben. After their marathons against James, Mervyn and Maurice then found the change of pace against the exceptional attacking skills of Rebecca and Erin harder to handle succumbing to straight set defeats. Again on the other table, James was giving value for money with another 5 set match while leaving the Glenburn coaches puzzled as initially he became ultra attacking. Ben produced excellent table tennis to edge the first set 12-10 before running away with the second set leading 10-1 before taking it 11-5. This was when James was reminded by Coach Steve that he was a defender, and there was a dramatic turnaround as James won the next two sets to 3 before closing out the fifth. This left Glenburn 9-0 up going into the doubles. As usual the doubles was the highlight of the night with some scintillating rallies and unbelievable returns from all players. After Glenburn edged the first set and ran away with the second set, it looked as if the match would be over quickly. However Ben and Maurice had other ideas and, in another dramatic turnaround, produced some of their best table tennis of the evening which Rebecca and Erin ultimately had no answer to, to win the next three sets and record victory for Civil Service. It was a great night’s entertainment played in the usual friendly spirit.”.

On the Away Side Civil Service 2A sent a team consisting of:

For the doubles Civil Service 2A had Ben Watson & Maurice Rooney joining forces to take on the hosts.

With the match card now fully completed the final score of Glenburn B (9) and Civil Service 2A (1) was recorded. 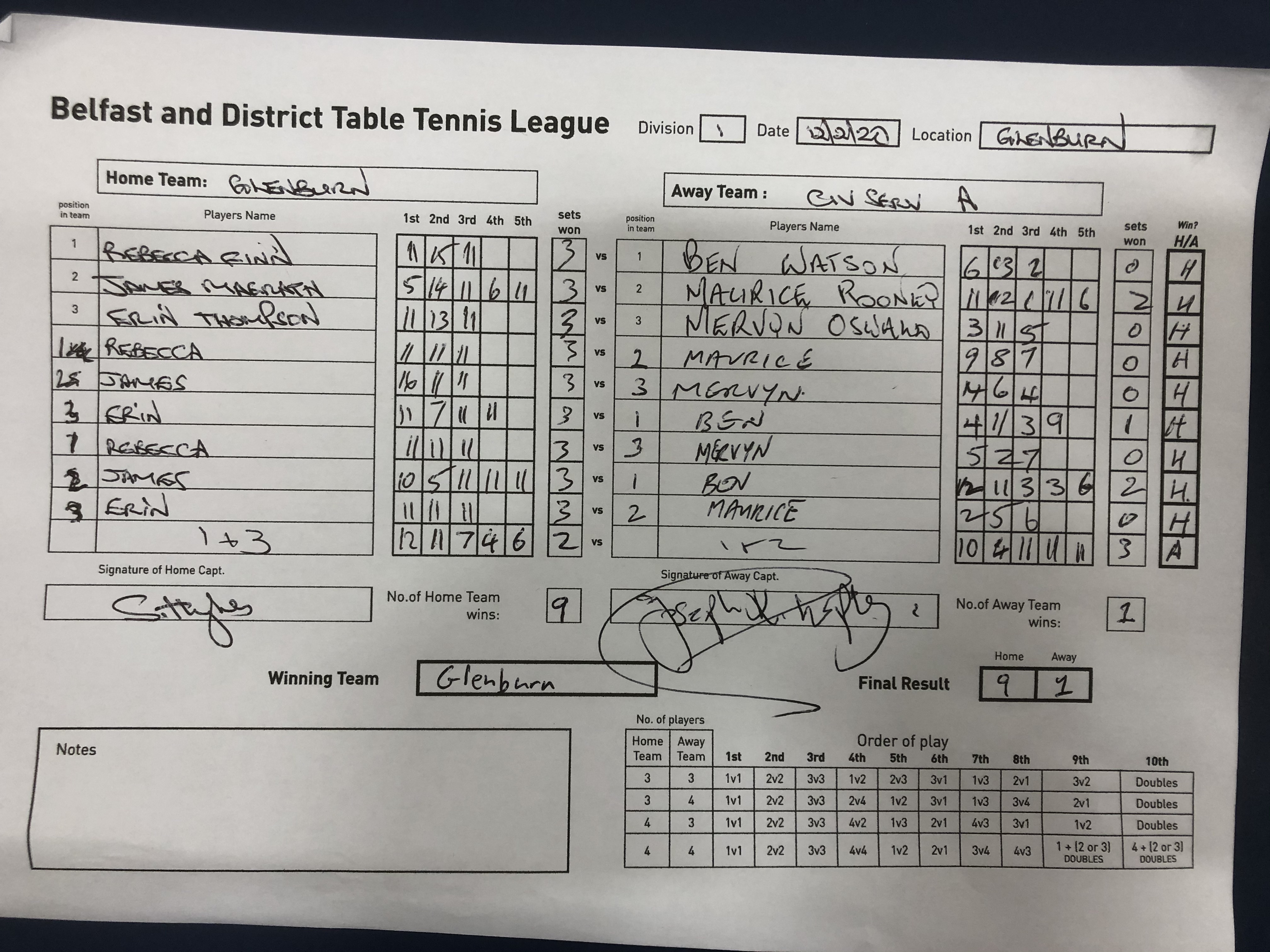