Tonight we saw St Annes B take on Glemburn B at home in Division 2 of the Belfast and District Table Tennis League. The match ended with a score line of St Annes B (3) and Glemburn B (7). The format for the match was a 3 Vs 3 player format. Neil Magrath reporting on the match said “Glenburn once again rotated their squad (or otherwise known as who can play this week?) with Erin making a welcome reappearance, and James and Lucy J giving way after their flawless performance the previous week, due to unavailability and the decision to only take 3 players on the trek to Dungannon on a school night. St. Annes came out of the blocks much quicker than Glenburn with Daniel recording a 3-0 victory over Erin and Mark edging out (literally) Steve 11-9 in the 5th in a match which could have seen the expedite rule engaged, but which also had some fierce hitting with Mark winning a very memorable rally with a cross court backhand. Next up was Lucy against Tom and Erin against Mark, with Glenburn again getting off to the worst start losing the first sets in each match easily. It was time for the girls to dig in, and with Erin now eventually warmed up she took the next 3 sets to record Glenburn’s first victory of the night. On the other table, Lucy was engaged in a see saw battle with Tom going 2-1 up before Tom played some excellent shots to get himself back on level terms. Lucy then used all her experience to grind out the 5th to level the match at 2-2. The next set of matches saw Lucy pit her skills against Daniel, and after two relatively straightfoward sets suddenly found herself in a great battle with Daniel with set points for and against in a set which could have gone either way until she eventually got over the line 17-15 in the 3rd. Meanwhile the vastly experienced Steve had too much in his bag of tricks for Tom, and he then repeated the feat against Daniel to record straight set victories. In a repeat of the reverse fixture at Glenburn, Lucy was straight back on the table again taking on Mark with a feeling of deja vu as she quickly went 0-1 down before fighting hard to win the next two sets 11-9, 12-10. Mark was not finished and came back to level the match. Into the decider and Lucy started well only for Mark to establish a lead going into the closing stages. Lucy then summoned her last strength to fight back and take the 5th 11-8 to leave Glenburn 6-2 up. This left Erin playing Tom in the final singles, and at this stage she was fully awake and won in 3 sets, hitting some great shots, although Tom gave as good as he got especially in the 2nd set which Erin edged 12-10. On to the doubles which saw Mark and Daniel line up against Erin and Lucy. Some who saw (or even played in it) may have described it as an exhibition match (others maybe not!), however there was some great tt by all four players, and suddenly everything Daniel hit were winning shots with Mark backing him up with some lovely shots. It was all too much for the Glenburn girls and,even with Mark’s generous (declined!) offer to let Steve use St. Annes ‘time out’ as well as their own, Daniel and Mark came out worthy winners 3-0. A very competitive match played in a great spirit. Many thanks to St. Annes for their hospitality and sportsmanship, and all the best for the remainder of the season.”.

The players that were fielded for the Home Team St Annes B in their playing order were:

On the Away Side Glemburn B sent a team consisting of:

For the doubles Glemburn B had Erin Thompson & Lucy Craig joining forces to take on the hosts.

With the match card now fully completed the final score of St Annes B (3) and Glemburn B (7) was recorded. 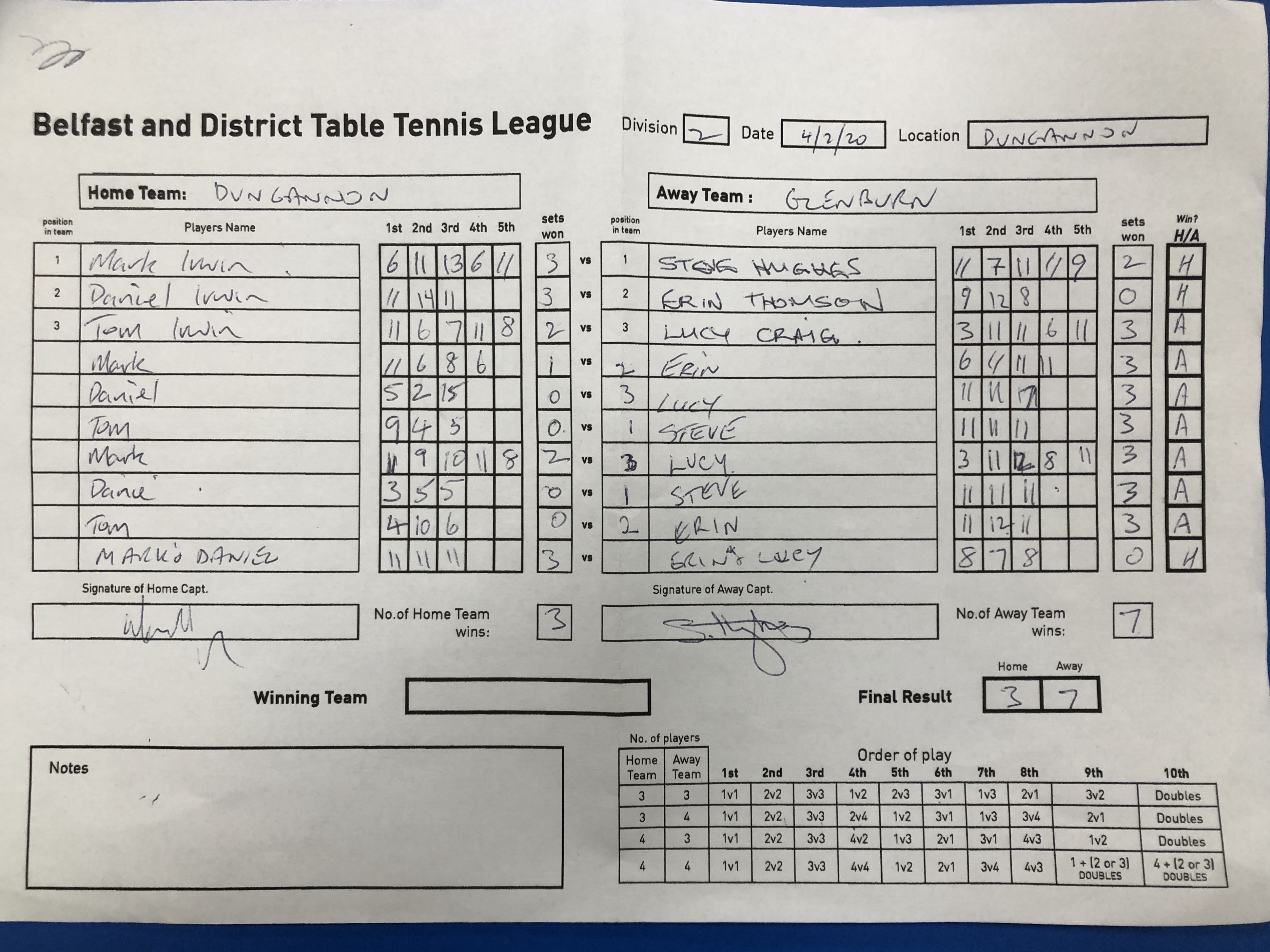